We don’t want fluoride in our water, but does boiling water remove fluoride?

Like many, I once believed boiling water was the be-all and end-all answer.

But before I tell you why I changed my mind, let’s find out if boiling water removes fluoride.

To figure this out, I did three simple things…

Test the fluoride levels of my tap water before boiling, boil some water, and then test that boiled water with a fluoride meter.

So let’s start with measuring the tap water…

The fluoride meter detected 0.6 ppm of fluoride in the tap water.

So does boiling water remove fluoride?

According to the fluoride meter, boiling water does not remove fluoride. As fluoride levels were 0.6 ppm before and after boiling. In fact, with longer boiling times, the concentration of fluoride may increase as more water evaporates.

But don’t worry, in a few seconds I’ll tell you exactly how to remove fluoride.

What Does Boiling Water Remove?

Before, my family and I would always boil our tap water.

However, after doing many tests, I’ve noticed boiling water is only good at removing certain impurities:

What Does Boiling Water NOT Remove?

Although boiling water is an excellent method of eliminating chlorine and germs, it fails to remove many other contaminants.

For the simple fact, high heat has no effect on these substances.

The only thing that happens, is water vapor escapes and leaves behind all dissolved minerals and solids:

What happened to the liquid?

Leaving behind all the meat, vegetables and spices. While only the water vapor escaped.

Now in our situation we’re not left with chicken, carrots and a dash of salt…

We’re served a higher concentration of fluoride, herbicides, pharmaceuticals and maybe if we’re “lucky” a dash of synthetic estrogen.

How Do I Remove Fluoride From My Water?

The only way to ensure you are drinking healthy water, is to take matters into your own hands.

And there’s only one way to remove fluoride… use a quality water filter.

And the best fluoride water filters happen to be reverse osmosis and distillers.

But the easiest, cheapest and most popular option would have to be getting a water pitcher from Clearly Filtered. 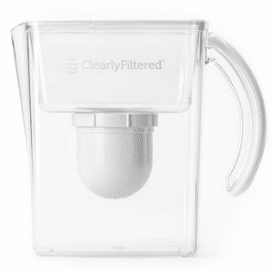 Note: if you plan on buying the pitcher, you should buy from Clearly Filtered (link to their website) and not Amazon. The price you pay will be cheaper and shipping time is the exact same if not faster through Clearly Filtered.

Lastly, in case you go with a brand I don’t recommend, here’s something you’ll find useful…

After testing dozens of filters, I realized many brands LIE about their filter being able to remove fluoride.

So to help you avoid being tricked, I’ve taken 25+ fluoride test results of the most popular water filters and put them into one document.

And all you have to do is enter your email below and I’ll send you the test results right away.

Enter your email below to receive fluoride test results on 25+ water filters!

In fact, as I’m writing this I can guarantee you most websites are still recommending “fluoride filters” that have zero effect on fluoride.

But the good news is, with this document you’ll never be fooled.

Anyways, there you have it, the truth about fluoride in regards to if boiling water remove fluoride.

By the way, if you don’t mind. Share this article with your friends and family. Many people believe boiling their water is good enough to ensure it’s safe to drink.

The guy exposing the truth about fluoride, one great article at a time. Now if you'd like to support what I do or show thanks, click on the "Buy me a coffee" button below. While if you have any questions, contact me using the buttons below (Instagram for a faster response).